Today I start Soylent with my roommate, well not that exact Soylent, I am using this recipe which I found on this website and then updated it's prices and factored in the price for multiple of certain items to make it last a minimum of 30 days. My recipe comes out to $7.10/day which comes in just under the $7.60/day (30 day month rounded down) for a month of Soylent from the main project.

I have decided to try and document my process not only for others who are interested but also for myself so I have details on how I felt every day. Before I go into detail on how today is going I want to go over making the Soylent.

Here are, almost, all the ingredients we used in a picture along with the cheap scale I bought: 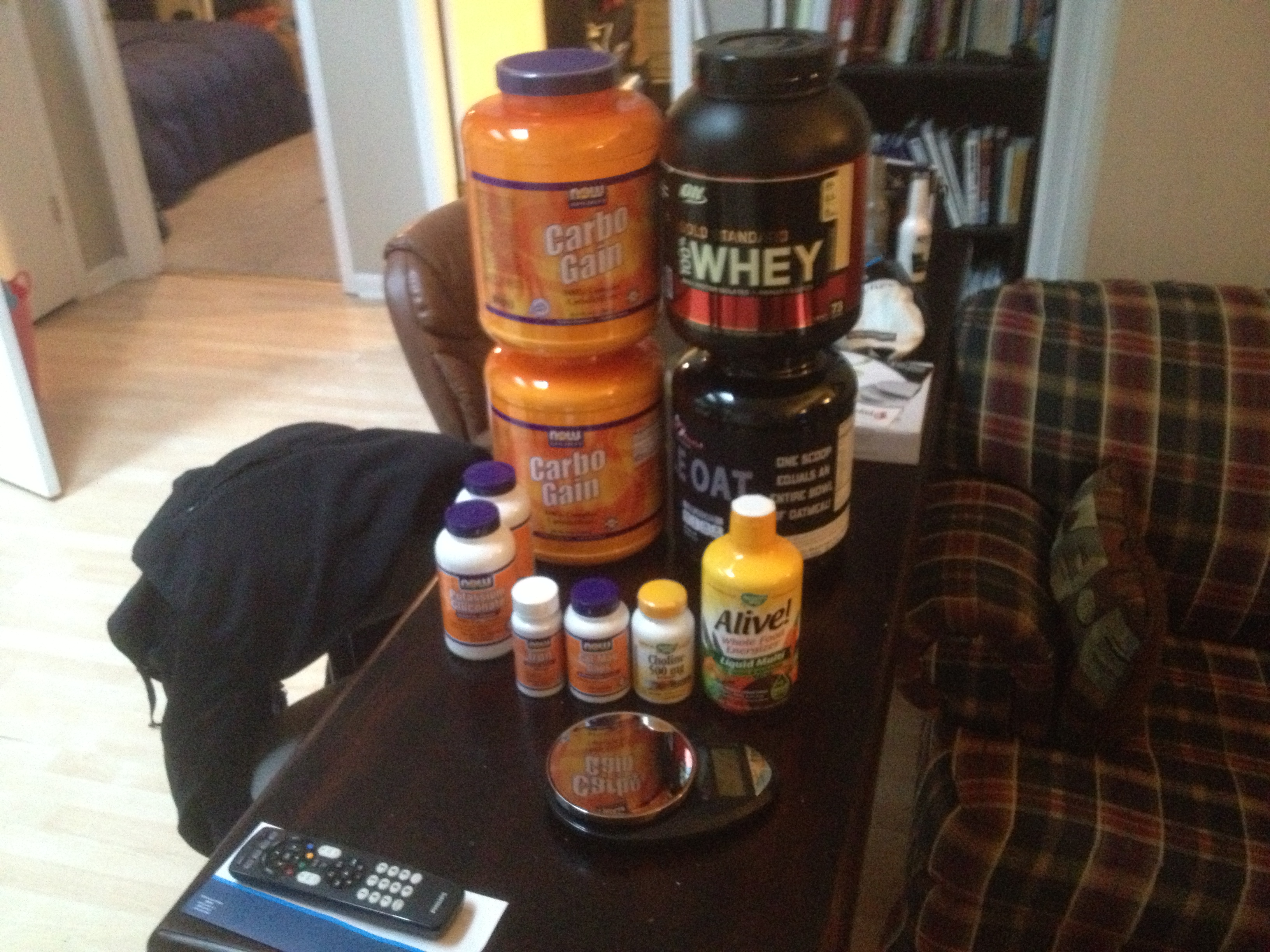 A few more items came in after that picture was taken but I can't find a picture with everything in it. Making Soylent isn't really hard but it does take some time and it does make a mess. Last night I made 1/2 days worth just to see what all was involved in making it and to make sure the taste wasn't too off-putting. I had planned to mix all the dry and wet ingredients separately then mix them together with water at work but after a little mixing with a whisk in a cup I realized that wasn't going to work. Just mixing with a fork/whisk left a lot of little chunks of power that I couldn't break up so I had to put it into the mixer. Since I don't have a mixer at work (And I don't want to have to clean it multiple times a day) I opted to mix everything ahead of time. When I made my 1/2 day test batch I added a lot of water and ended up filling up the ~5 cup mixer we have so when I made the batch for Monday (Today!) I only put in enough water to clean off the measuring utensils (so I didn't miss anything) and then just a little more so it would mix. By doing this I was able to fit the whole day batch in the mixer.

Obviously this batch was much thicker than first 1/2 day batch but it took up a lot less space which was my goal. Here is a picture of it in an IKEA container. That bag on the top are the pills for the day. 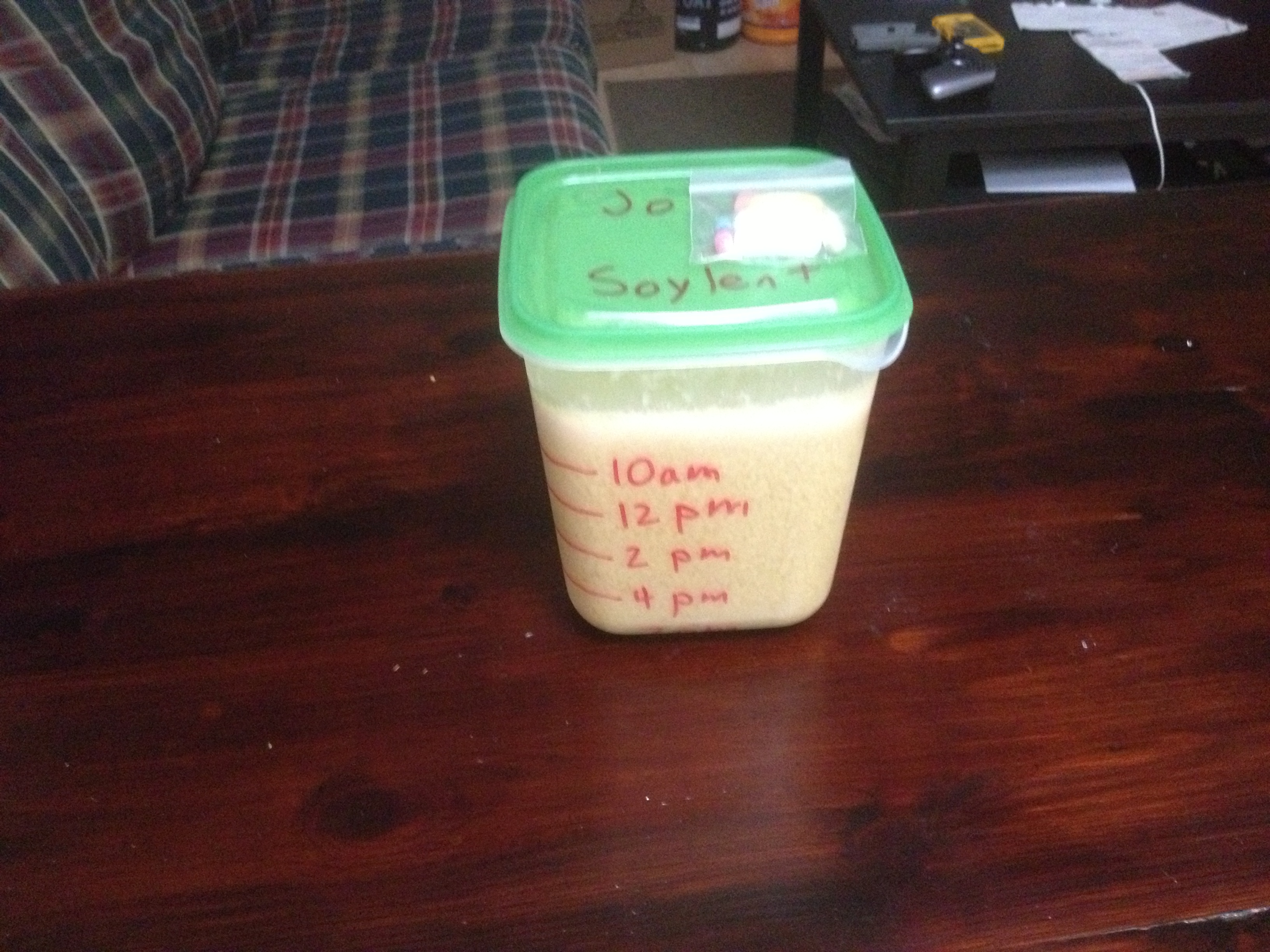 I drew lines on the container to show how much I wanted to have drank by X time each day. I decided to break it into 5 portions (as have many other Soylent DIYers) so that I "Eat" throughout the day instead of stopping and eating 1 portion at time. This was one of my primary reasons for trying Soylent, to be able to "Eat" constantly instead of stopping what I was doing to eat. I am a fast eater (At least when I eat by myself) so I end up eating more than I need. I see most meals as just fuel and so I just want to consume it and move on with my life. I am hoping that Soylent will allow me to change that by slowing eating all day instead of stopping what I am doing just to eat.

I am currently on my second "portion" of Soylent for the day and a few things to note: 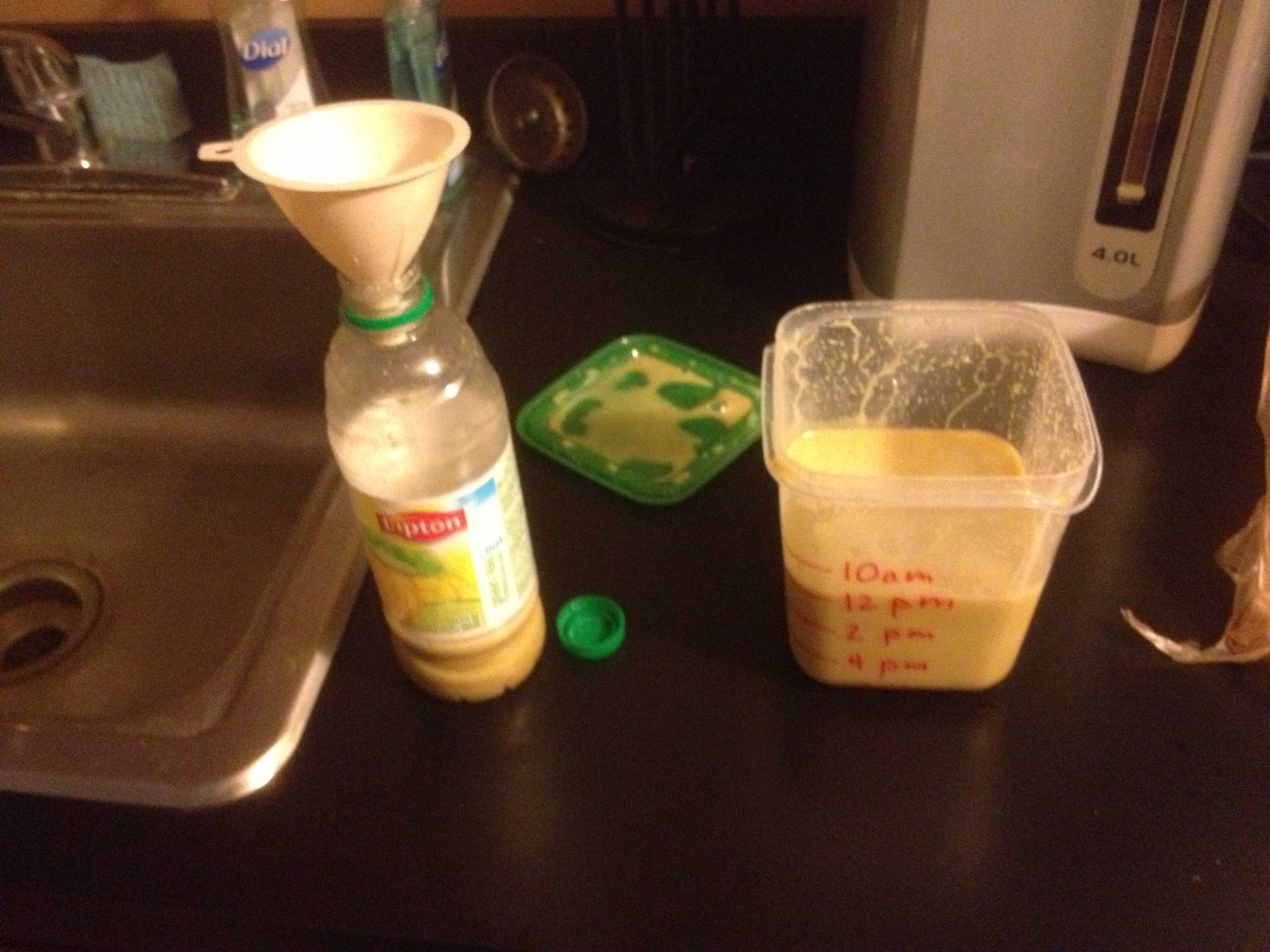 As far as feeling "full" I have drank ~1.5 portions and have yet to feel hungry so I guess it is working. I have been pouring 1 portion into a regular 500ml bottle which will fill up a little less than 1/5 of the bottle and then fill the rest with water. One thing that I am going to try in re-thinning the Soylent after drinking half or so of my bottle so that I get to put more cold water in it and it's a little thinner/easier to drink.

Taste. I know this is a big one for many of you out there. We went with the French Vanilla flavored whey because regular Vanilla was like $20 more and we are cheap. The flavor isn't bad, it doesn't smell great (not bad, just not great) but it tastes better than it smells. I think the main flavor that I am not a huge fan of is the Oat Powder. I think that the double chocolate whey might be a better flavor for the future as I think it would mask the oat better. One thing I have read on other DIY Soylent blogs is that after a few days you will grow to like/love the taste, check back in a few days and I'll let you know if that is the case.

What about Food? Well, I am planning on going on Soylent 100% for at least 2 weeks if not a month (We only have 1 months worth to share right now) so that I can work out any issues and then once I am sure my recipe is "stable" I may start eating "real food" 2-3 times a week. I fully plan on going out to eat with friends from time to time but I want to remove all other factors while testing it.

Well that is all for now, I'll update this blog if anything else comes up today.

After a day of Soylent I feel fine. I did have cravings throughout the day but that is par for the course according to other Soylent DIYers so I'm not worried. I have experienced some additional gas but not the smelly kind (Hey I know it's gross but this is for science! But really, sorry) but I will wait a day or two before adjusting the formula.

My roommate, Tyler, and I started to work out our process for making Soylent and have weighed everything that we only had measurements for to simplify the mixing process (weighing everything is much easier). We have updated our recipe but I would caution against using them with measuring them out yourself, we sub-ed our own olive oil while we wait on the stuff we ordered. We will re-weigh it when we get the oil that is on the list. That is if we don't switch that out for peanut butter which kamkash suggested on the Soylent Discourse.

Also a point that Tyler just brought up is our scale is a POS. Yes it was cheap and had the units we needed but I have a bad feeling it is not very accurate. Once we find a better one I will mention it a future blog post.

Here is a picture of our blender (Yes it is probably older than I am) that we used without water added. 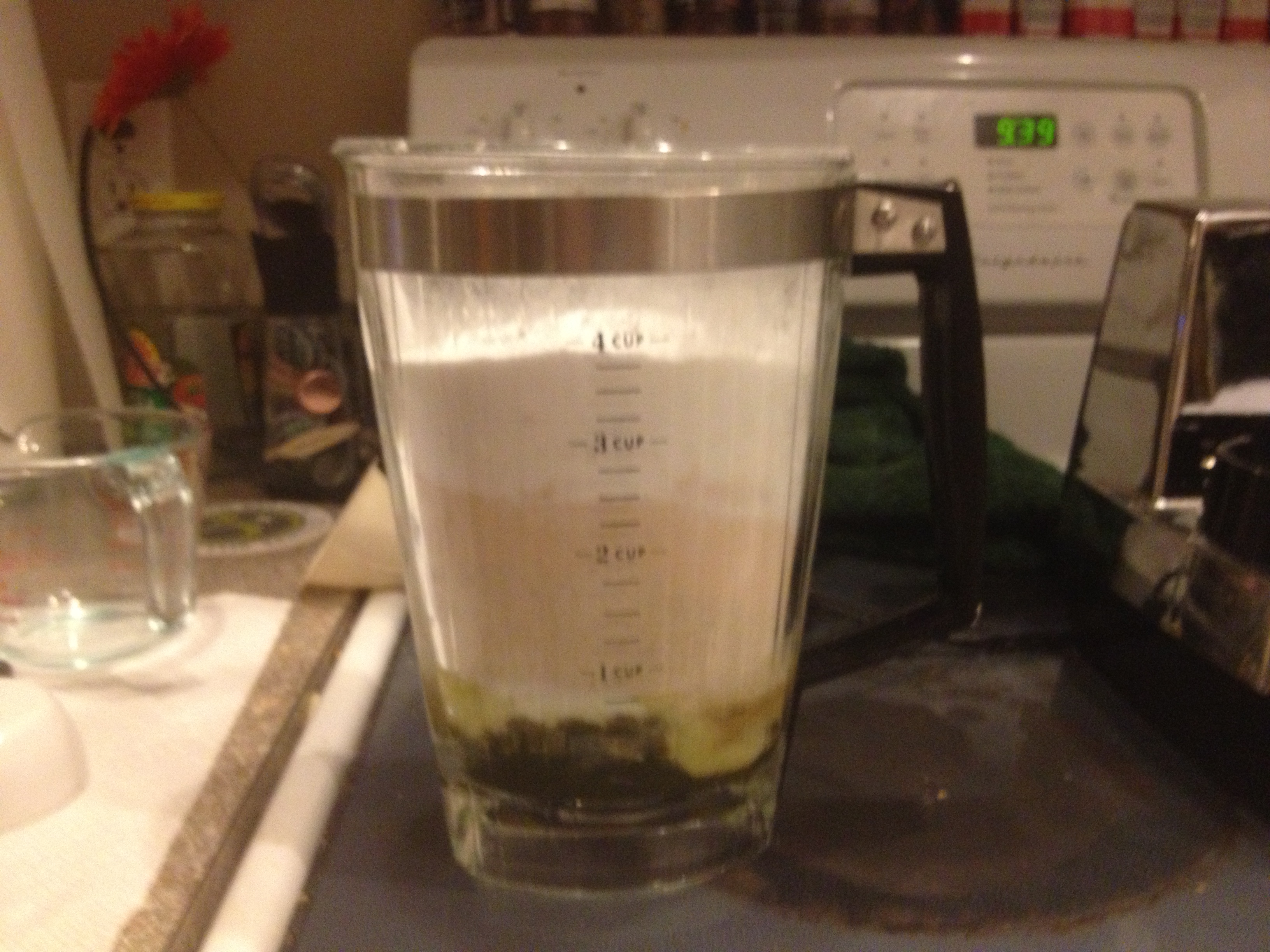 We also changed the order and slightly modified the instructions on how to make it from the original website, you can see our modified version here. Here is another picture of it after adding the water and blending a little bit.

We had to use a spoon to scrape the powder off the sides of the blender to make sure it all got blended.

Well that's all for tonight, looking forward to day 2.